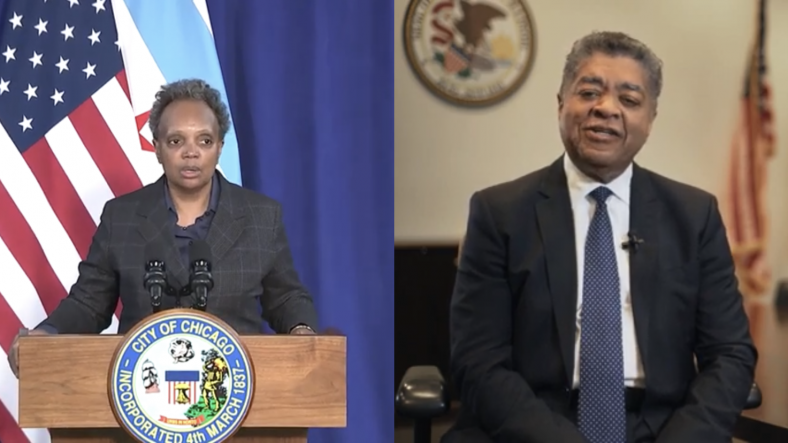 Thanks to woke criminal justice reforms, 90 people accused of murder are out of jail on ankle monitored bail, along with scores of others accused of violent crimes.

“They’re right back on the street walking big as day as if there is zero accountability. That’s what’s contributing to the level of brazenness that we’re seeing on our street,” Mayor Lori Lightfoot said last week.

RELATED: Chicago alderwoman wants citizens to respond to crime by blowing whistles and running at the perpetrator

Chief Justice Timothy Evans enacted sweeping reforms in the city starting back in 2017, and the crime statistics show the streets of Chicago are now far more dangerous. Since the Evans reforms, 75% of those out on bail with electronic monitoring bracelets are accused of violent crimes. In 2021, Chicago law enforcement arrested 133 people for a violent crime while they were already on electronic monitoring for a previous crime. 7-year-old Jaslyn Adams was one of the victims killed last year by a criminal on an ankle monitor.

Mayor Lightfoot objected to the reforms, asking, “Do you feel safer knowing these numbers? I don’t think any sane person does.”

Evans remains firm in his support of his reforms, despite the results and loss of life.

“A judge cannot hold someone pretrial without a finding that the defendant poses a real and present threat to the physical safety of any person,” he said.

“This must be found by clear and convincing evidence and the burden of proof is on the prosecution,” he maintained.

RELATED: Woman with concealed carry license defends herself against attack in Chicago

Chicago Police Chief Superintendent David Brown has been very strong in his opposition to reforms like Evans’s and firmly believes that the rise in crime is in large part a result of soft prosecution and bail conditions that are too lenient for the crime.

“The fact that over 90 people charged with murder have been released by our courts, back into the community does two things. Number one, it creates this idea of lawlessness for people in the community who know someone murdered someone, and yet there they see him again, the following days, as if nothing happened. Secondly, because these people murdered someone, the victim and their associates retaliate indiscriminately of where they are. So whether in a car with their kids, whether they’re in a large crowd or gathering, they are the targets for retaliation,” he warned.

The trend of “soft prosecution” and leniency extended to violent criminals in Chicago is part of a wider trend throughout the U.S., bankrolled by leftist donors and extolled by Democratic politicians. In New York City for example, Alvin Bragg, theManhattan District Attorney, has publicly stated he will not be prosecuting a variety of violent crimes and will be downgrading others, such as armed robbery.

RELATED: Mayor Lightfoot slammed for promoting a holiday invented by a radical convicted of torturing women

“Biggest takeaway from this EM talk is that Chief Judge Timothy Evans runs his own EM program (separate from the Sheriff’s Office) and refuses to divulge any information about it to anyone and is also FOIA exempt. No one knows who’s in it, how many, etc besides Evans,” said an independent community watch group in Chicago.

“And that violent offenders are the majority of people on EM. If they’re too dangerous to let go on an i-bond, why release them? And if they’re not dangerous, why monitor them via EM? Dangerous people belong behind bars,” they maintained.