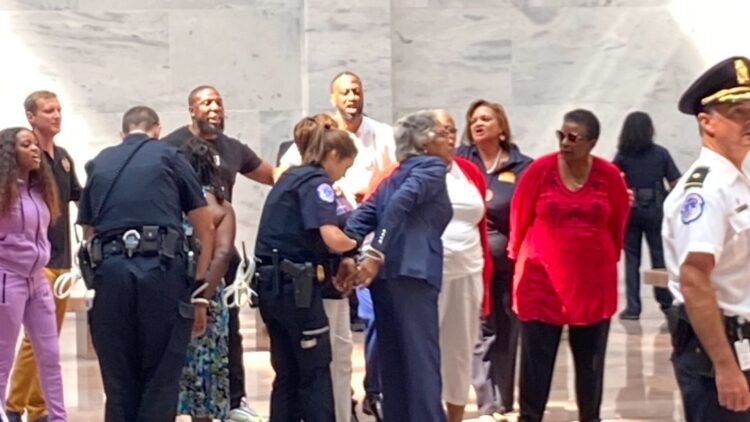 Congresswoman Joyce Beatty (D-OH) and other members of Congress were arrested Thursday after storming the Hart Senate Office Building in protest of the filibuster rule.

“This afternoon, nine people were arrested for demonstrating in a prohibited area on Capitol Grounds. At approximately 3:30 pm, the United States Capitol Police responded to the Atrium in the Hart Senate Office Building for reports of illegal demonstration activity,” Capitol Police said.

“After officers arrived on the scene, they warned the demonstrators three times to stop. Those who refused were arrested for D.C. Code §22-1307. Two males and seven females were transported to USCP Headquarters for processing,” they added.

“Rep. Beatty is being zip tied as USCP starts to make arrests,” tweeted Nicholas Wu, a reporter for Politico. Moments before the arrests, Beatty and the other protestors were chanting “End the filibuster.”

At the time of the arrests, Beatty posted to Twitter that she was marching to the Senate to demand the rights of black women to vote.

“Black women are demanding OUR right to vote! We’re marching to the Senate to send a strong message. #OurPowerOurMessage” Beatty tweeted.

Co-founders of the Women’s March, Linda Sarsour, and Tamika Mallory were seen marching with Beatty and posing for pictures shortly before the arrests were made. Sarsour, an admitted Socialist, has repeatedly come under fire for making inflammatory, anti-American, and anti-Semitic remarks.

Beatty also ensured that images of her arrest were shared on her Twitter account, with the caption, “Let the people vote. Fight for justice.”

It is unclear what rights Beatty and her fellow protestors are demanding, as the right to vote for African Americans was granted in 1870 when Congress passed the 15th Amendment. Declaring that voting rights could not be “denied or abridged by the United States or by any state on account of race, color, or previous condition of servitude.”

In August of 1920, the 19th Amendment was ratified, enfranchising all American women with the right to vote, declaring they, like men, deserve all the rights and responsibilities of citizenship.