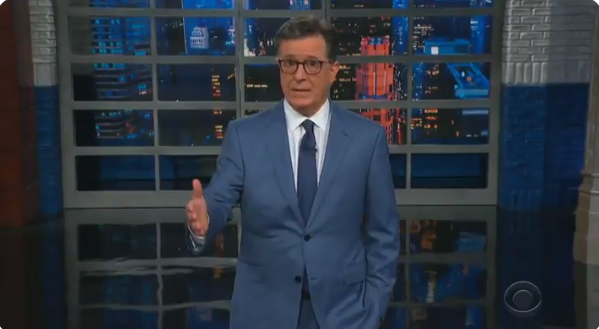 Critics are pouncing on TV host Stephen Colbert for comparing the Taliban’s takeover of Afghanistan to the Capitol Hill riots on January 6th in the U.S.

“Why should our soldiers be fighting radicals in a Civil War in Afghanistan? We’ve got our own on Capitol Hill,” the “Late Show” host said, showing a picture of January 6th on the screen.

People were quick to comment that the comparison was neither accurate nor funny. “God this is irresponsible,” said one person.

“Clearly the same thing,” someone else said.

“I don’t remember people dangling from airplanes on jan 6,” tweeted someone else.

Some users noted that Colbert and CBS were not the first ones to draw the comparison. “From “insurrectionists” to “radicals” the left and mainstream media will stop at nothing and use every scenario to fit their narrative,” observed one person.

“@StephenAtHome needs to check his brains. Comparing a riot with Taliban, which wants stone age sharia laws. What an idiot,” said someone else.

“Oh wait, so now I’m both a white supremacist AND a Taliban member because I voted for Trump? How does THAT work

“Hey @CBS do you condone Stephen Colbert’s call for the US Military to crack down on American citizens?” wondered one Twitter user.

“I was just wondering how Colbert how hoped to remain relevant post-Trump; “not even bothering to try” wasn’t my first guess, I’ll admit,” said someone else.

“Its amazing how far off the rails he’s gone. He used to be pretty funny bach [sic] during the daily show days, but now….wow just embarrassing,” someone observed.

“This has been their strategy for a long time, back conservatives to corner and when they fight back blame everything on them with the help of media. It works everytime,” someone tweeted back.

Few Twitter users agreed with Colbert, but one fan remarked, “He’s right. We did have radicalized extremists storm our own Capitol. Denying it does not make that fact go away.”

CBS did not immediately respond when contacted for comment.