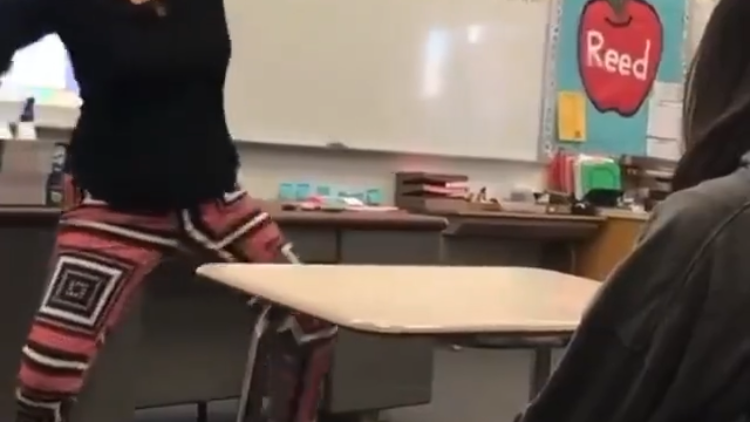 A white California teacher was placed on leave after impersonating a Native American while attempting to teach her students a “chant” to help them memorize trigonometry information.

A Native American student filmed the incident, saying that after watching Reed’s act for a few minutes, he felt “violence was being committed against him and he had the right to record.”

Reed was reportedly trying to help her students remember important information about mathematical functions. As she danced around the room in her headdress doing the “tomahawk chop,” and screeching, she repeated the well-known mnemonic “SOH CAH TOA,” which refers to the trigonometric definitions of sine, cosine, and tangent.

One Twitter user who shared the video claims that Reed has taught this lesson to her classes since at least 2012.

“As an educator, there is NO WAY that there is a justifiable reason for that,” tweeted another person.

“This is from Riverside, CA? I’m from there and Native from the Cahuilla Band of Indians. How is this happening when there are literally at least 10 Native tribes in the surrounding area. UCR (University of Ca Riverside) works with Natives in the are and she didn’t know???

The Riverside Unified School District responded to the incident and placed Reed on leave. “These behaviors are completely unacceptable and an offensive depiction of the vast and expansive Native American cultures and practices,” they said in a statement.

“We are deeply committed to implementing inclusive practices and policies that honor the rich diversity of our district and the greater region. We will be working with our students, families, staff and community to regain your trust.”