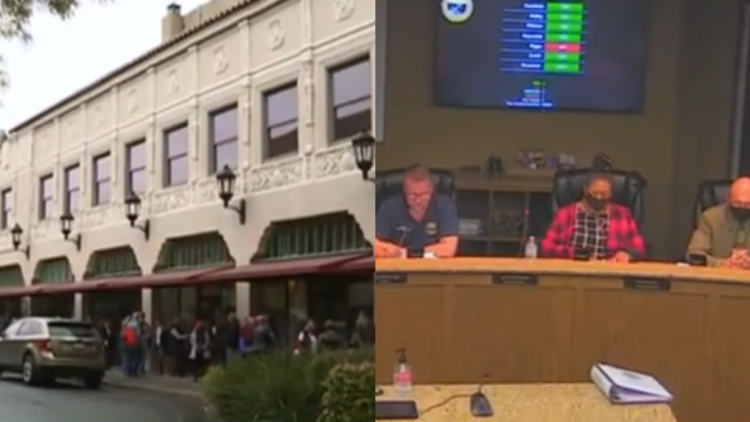 The city council of Oroville, California, voted 6-1 to declare itself a “Constitutional Republic City” in an attempt to avoid Governor Newsom’s COVID-19 restrictions and mandates.

“I think it’s time for us to draw a line in the sand,” said Oroville mayor, Scott Thomson. “Enough is enough.”

The council said the resolution was not in response to a particular law or mandate, but rather the cumulative effect of a year and a half of government restrictions.

“It’s just basically drawing the line,” Thompson said. “It’s not necessarily against one specific mandate, we’re not talking about one mandate that’s been pushing on us recently, it’s a barrage of mandates.”

“This has to do with the large amount of mandates that are affecting every aspect of our lives and our kids’ lives,” he continued. “The American culture and way of life is being challenged at its very core and perverted by radicalized politicians who have forgotten that, as a republic, the power belongs to the people.”

The goal of establishing a constitutional republic is to give Oroville the power to opt out of California mandates they do not wish to follow, specifically “any executive orders issued by the state of California or by the United States federal government that are overreaching or clearly violate our constitutionally protected rights.”

Oroville, about 90 miles outside Sacramento, has a population of 20,000.

According to The Guardian, “Last year, Oroville refused to enforce state requirements prohibiting indoor dining. Butte county, where Oroville is located, declined to recommend a mask mandate earlier this fall.”

City Attorney Scott Huber compared the move to resolutions passed that declare cities or towns to be “sanctuary cities” for illegal immigrants, and noted that Oroville’s resolution can be changed or amended whenever they desire.

“I am quite certain that this would not result in any loss of funding for the city,” Huber told ABC 7. “In the event that it could in the future you could revise this and do what you will but this is not going to put it jeopardy any state or federal funding.”

UC Davis Law Professor Lisa Pruitt thinks the resolution has essentially no legal basis. “My sense is the strong presumption would be that the city of Oroville does not have the power to do this,” she said. ” I see this primarily as a gesture.”