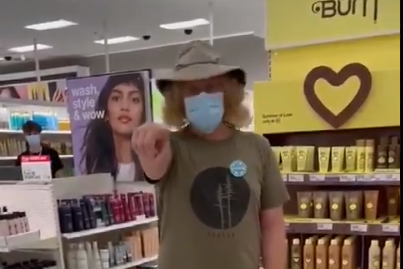 A man was recorded following and berating a woman for not wearing her mask inside a Target causing bystanders to intervene.

“You’re not gonna follow me around in the store and point at me to people. So I will video you,” the woman tells the man as he stands in front of her wearing an “I’m vaccinated” pin.

“What are you doing?” the man angrily asks a woman who put her cart in front of him to block him from the woman he was following.

“This is between the two of us,” he tells the bystander as he points at the woman.

“My wife is a specialist in infectious diseases, so you know, you think that she doesn’t know what she’s talking about?” the man says.

“It’s all of our jobs as a community to come together to make sure that people are shamed,” he continues.

“You’re a bad American!” the man says as he continues to follow the woman.

“I am, and I voted for Trump!” the woman replies, to which the man calls her a “bad person.” Others in the background yell, “Yay! I voted for him too!”

Another bystander intervenes and argues with the man about everyone’s right to personally choose whether to wear a mask or not.

“My mom was vaccinated and still ended up in the hospital with COVID,” the bystander tells the man. “It’s her choice.”

“You’re putting the community at risk,” the man continues to say as others say back to him that he’s “being harassing.”

“Come on. This is America! Are you serious? This is disgusting,” another woman is heard yells at the man.

Reactions to the video spread quickly on social media.

“Why doesn’t this shit ever happen to me?” one Twitter user said.

“CNN is now inciting stalking and harassment like this. This is the kind of creep who watches Don Lemon,” said Paul Joseph Watson.

“A dude named Karen thinks it is his mission to “shame” others,” Sen. Ted Cruz said.

“This virus have given power to people who would otherwise be insignificant. A sense of irrational purpose they aren’t going to let go,” said someone else.