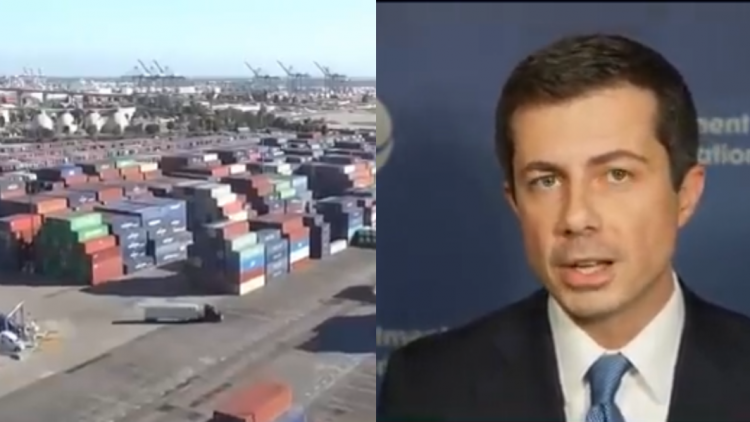 Critics slammed Secretary of Transportation Pete Buttigieg for being absent during the supply chain crisis facing our nation, a time when leadership is desperately needed.

“The Buttigieg Scandal is much worse than people even realize. Not only was a Cab Secy on secret leave during a nat’l crisis impacting MILLIONS for which he had prime responsibility, but Biden evidently failed to appoint an Acting Secretary to run DOT—even as the crisis exploded,” tweeted Stephen Miller, senior advisor to former President Trump.

Although it had been kept under wraps, Buttigieg’s office recently revealed that he has been on leave since mid-August since he and his husband welcomed newborn twins.

A spokesperson for the Transportation Department told Politico that Buttigieg was “mostly offline” during the first four weeks of leave, and that he’s been “ramping up activities since then.”

Tucker Carlson took aim at Buttigieg’s absence, saying, “Paternity leave, they call it, trying to figure out how to breastfeed, no word on how that went.”

Following Carlson’s commentary, Buttigieg appeared on multiple media outlets to speak out in favor of the Biden administration and to showcase his presence and assure the American people of his involvement in the supply chain crisis.

“Biden, Blinken, and Psaki all went on vacation during the biggest foreign policy disaster since Vietnam. Buttigieg is out during a supply chain disaster that will cripple this economy. It’s the Vacation Administration,” said Jesse Kelly.

“The questions to ask Transportation Secretary Buttigieg are quite simple: How many ports in California or Georgia or New Jersey have you visited? How many port operators and trucking executives have you met with in person? Who served as acting director during your extended leave?” queried Joe Concha.

“Buttigieg took months off in the middle of a supply chain crisis that he knew was coming months ago. A bunch of clowns playing the homophobe card isn’t going to make this go away,” said Arthur Schwartz.

“Empty shelves? Don’t worry. He’s on it,” said another tweet.

“What is really strange is that, you know, this is from a side of the aisle that used to claim the mantle of being pro-family,” Buttigieg said. “What we have right now is an administration that’s actually pro-family. And I’m blessed to be able to experience that as an employee, being able to have the flexibility to take care of our newborn children.”