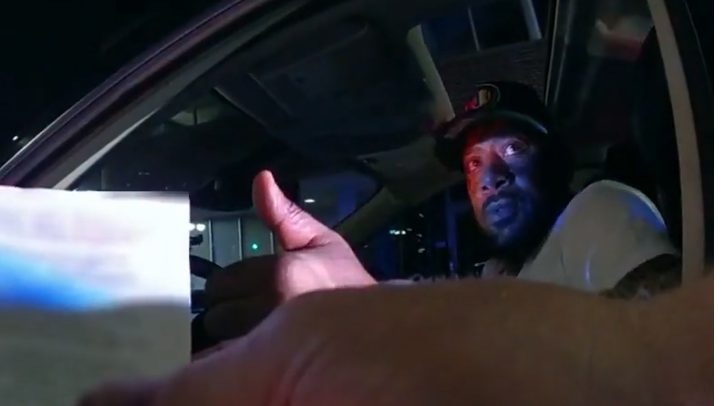 Minnesota police released bodycam footage from a traffic stop involving state Rep. John Thompson, who claimed he was pulled over for the crime of “driving while black.”

The officer approaches Thompson and asks, “Why in such a hurry?” “I don’t think I took off like a bat out of hell, I just drove off,” Thompson replied.

The officer then asks Thompson for his proof of insurance, which he says is on his phone, before mentioning to the officer that he is a state representative. The officer questions his Wisconsin license before returning to his squad car for roughly 14 minutes.

The officer prints a citation and returns to Thompson’s vehicle apologizing for the delay. “You’re suspended in Minnesota,” the officer says to the politician. He shakes his head no, and the officer continues saying, “That’s what the computer says. If it’s wrong, you’ll have to deal with DVS [the Department of Vehicle Services].”

Thompson then asks why the officer pulled him over, to which he responds, “No front plate, and the way you took off from the light back there.”

“I’m too old to run from the police man,” Thompson says to the officer. “You profiled me because you looked me dead in the face, and I got a ticket for driving while Black. You pulled me over because you saw a Black face in this car, brother. There’s no way in hell I’m taking off with you behind me…You looked in this car and busted a U-turn and got behind my car, and that’s the reason.”

The officer interrupts Thompson to tell him that his body camera is filming the traffic stop.

“I know. But what I’m saying is, what you’re doing is wrong, to Black men,” Thompson says. “And you need to stop that. Thank you so much, but this ticket means nothing to me … What I’m saying to you is stop racially profiling Black men in their cars sir. Stop doing that.”

The officer assures Thompson that there was no racial profiling or racial motive behind the traffic stop before wishing him a good night and walking away.

Thompson has reportedly never held a Minnesota license, according to local media reports, and the officer cited him for driving with a suspended Wisconsin license. His license was suspended in 2019 for failure to pay child support in Ramsey County, Minnesota.

St. Paul Police Chief Todd Axtell demanded an apology from Thompson for accusing the officer of racially profiling him. Axtell released the bodycam footage to help clear the officer’s name.

“These aren’t accusations I take lightly, so I looked into the traffic stop, watched the body-worn camera footage, and spoke to the sergeant,” Axtell wrote in a Facebook post. “This stop, made at about 1:20 in the morning, had absolutely nothing to do with the driver’s race.”

“Simply put, the traffic stop was by the books,” Axtell wrote. “What happened afterwards was anything but, I’m dismayed and disappointed by the state representative’s response to the stop. Rather than taking responsibility for his own decisions and actions, he attempted to deflect, cast aspersions, and deny any wrongdoing.”

“The driver, an elected official who does not dispute driving without a front license plate, owes our sergeant an apology.”

Thompson later released a statement explaining why he had a Wisconsin license.

“I previously lived in Wisconsin, and my family and I considered moving back there to care for a family member, who will now be coming to live here,” Thompson said. “I live and work in St. Paul, and have for many years. My Wisconsin license hadn’t previously posed an issue for me, but I will now be changing it to a Minnesota license, as I should have before. During my stop, I was also informed that my license had been suspended for a minor child support issue, one which was resolved long ago. I owe $0 in child support.”

“I was able to drive away from this interaction while other Black Minnesotans, in very similar situations, have not,” Thompson added.

The discrepancy in Thompson’s address has sparked questions about his residency, and whether he is actually eligible to represent District 67A since representatives, by law, must live in the district they represent.