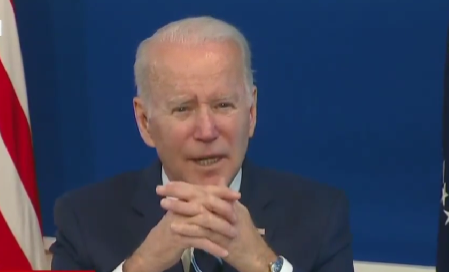 The president made a public appeal to the media and big tech from the White House Thursday, begging them to censor content for “misinformation.”

“I make a special appeal to social media companies and media outlets — please deal with the misinformation and disinformation that’s on your shows. It has to stop,” contended President Biden.

“Should we remind him about the First Amendment or nah?” one person asked.

“The same week as Biden’s instruction to platforms, Dan Bongino is suspended and Ron Paul is blocked. Who will be next,” wondered Congressman Darrell Issa (R-CA).

“The “misinformation” keep being proven correct over and over again This is why we should never ban speech because that’s how we figure out what is true,” tweeted UFC/MMA champion Jake Shields.

“Unfortunately, while our military is stepping up as they always do, there are others sitting on the sidelines and worse, standing in the way. If you haven’t gotten vaccinated, do it,” said Biden during the same public address.

“The social media companies HAVE BEEN dealing ‘with the misinformation’, and they have been getting it wrong, and sewing distrust in the public health institutions, and their censorship HIGHLIGHTED people who promote vaccine hesitancy via the #StreisandEffect,” tweeted someone else.

“Yes! The misinformation is out of hand,” another Twitter user said in irony.

Biden’s appeal comes amid an ongoing trend of conservative journalists, politicians, and private citizens being banned from big tech platforms for expressing views or asking questions that oppose leftist narratives.