Biden says he isn’t ‘supposed to take any questions,’ turns back when asked about Afghanistan 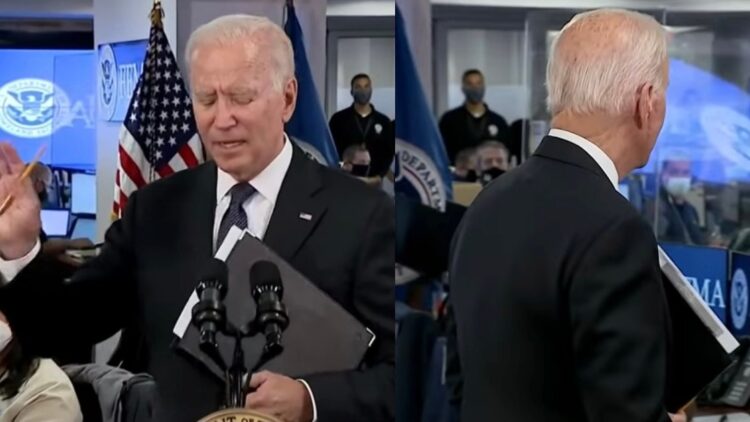 President Biden told a group of reporters at the Federal Emergency Management Agency headquarters on Sunday that he wasn’t “supposed to take any questions” before refusing to take a question on Afghanistan.

“I’m not supposed to take any questions, but go ahead,” Biden said to a reporter after making remarks about Hurricane Ida during a stop at the FEMA headquarters.

“Mr. President, on Afghanistan,” the reporter says before Biden quickly cuts her off, saying, “I’m not gonna answer Afghanistan now.” Biden throws his hand up, then turns his back and walks away.

“Why do you continue to trust the Taliban, Mr. President?” one of the reporters asked.

Hurricane Ida made landfall in Louisiana earlier on Sunday as a category 4 storm. It has caused catastrophic damage leaving more than 1 million residents throughout Louisiana without power.

Reactions to Biden’s remarks were widespread across social media as many asked who is telling Biden he isn’t allowed to take questions.

“What the hell did I just watch??? Biden is asked a question on Afghanistan, he refuses to answer and walks away,” Politics 2.0 tweeted along with a video of the incident, which has garnered more than 1 million views in less than 24 hours.

“One of these reporters needs to ask, ‘WHO is telling you that you are not supposed to take questions? And why not?'” said another Twitter user.

“I’m not supposed to take questions? Who the F is in charge?” asked another.

“Sleepy Joe Biden at FEMA Headquarters: ‘I’m not supposed to take any questions, but go ahead.’ ‘Mr. President, on Afghanistan…’ Joe: “I’m not gonna answer Afghanistan now. A better question would have been ‘Mr. President, who decides what you are allowed or not allowed to say?'” said someone else.

“Isn’t he the President of the United States?! Who’s running the show here?” asked another.

“Who told you @POTUS not to take any questions? You work for Americans, sucker. You answer to us,” said someone else.

Others defended his decision not to take the question.

“There is a mission in progress why should he take these dumb as [sic] question,” replied one defender of the President.

“Because he’s at FEMA to talk about the hurricane.. Hello. I’m not happy with him either, but why he did that was obvious, the focus of his statements was IDA at that moment,” said someone else.

Biden has received much criticism for his handling of the U.S. withdrawal from Afghanistan and his refusal to answer questions about the ongoing crisis.

Days after Kabul fell to the Taliban, Biden refused to take questions from reporters while the evacuations were underway. Following a speech about COVID, Biden walked away from reporters.

However, the White House insisted that Biden has not been intentionally refusing to address the Afghanistan crisis.