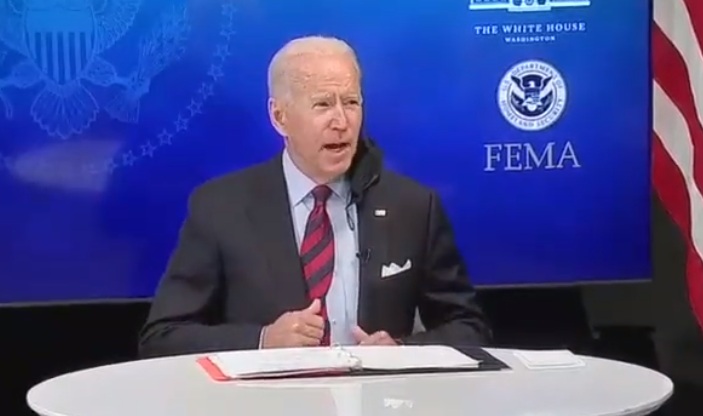 President Biden is receiving criticism for referring to his Black senior advisor, Cedric Richmond, as a “boy” who “knows Louisiana very well.”

“I’m here, uh, uh, eh, the FEMA’s director’s on, uh, uh, FEMA Director Criswell, she’s on. And I’m here with, uh, with my senior adviser and a boy who knows Louisiana very, very well, man, and, and New Orleans, Cedric Richmond,” Biden said Monday during a virtual meeting with his advisors on the devastation left behind from Hurricane Ida.

“Not only does Biden not sound great here, but also called Cedric Richmond ‘boy,’ something the left would lose it if he were a Republican: ‘I’m here with — with my senior adviser and boy who knows Louisiana very, very well — man — and — and New Orleans, Cedric Richmond,'” tweeted Curtis Houck along with a video of the incident.

The term “boy” is considered by many to be a racially derogatory term for Black men.

Biden has been criticized in the past for questionably racist comments. During the 2020 presidential election, he was widely criticized for saying that Black people who do not vote for him “ain’t Black” during an appearance on the Breakfast Club talk show.

During the campaign, he was also ridiculed for recalling how segregationist Democrat Senator James O. Eastland called him “son” but never “boy.”

While campaigning in 2012 as Barack Obama’s Vice President, Biden told a group of Black voters that opponent GOP nominee Mitt Romney wanted to “put ya’ll back in chains,” referring to slavery.

“[Romney’s] going to let the big banks once again write their own rules – unchain Wall Street!” Biden said. Then he added, “They’re gonna put ya’ll back in chains” with their economic and regulatory policies.

““my senior advisor, and…” WHAT?” said Jorge Bonilla.

“Cedric Richmond is a 47-year-old man. While Ja’Ron Smith was 38 years old when he was in a similar role for President Trump I can assure he was not called a “boy” by President Trump. Joe Biden just continues to insult Black men openly and in public because he doesn’t care,” tweeted Paris Dennard.