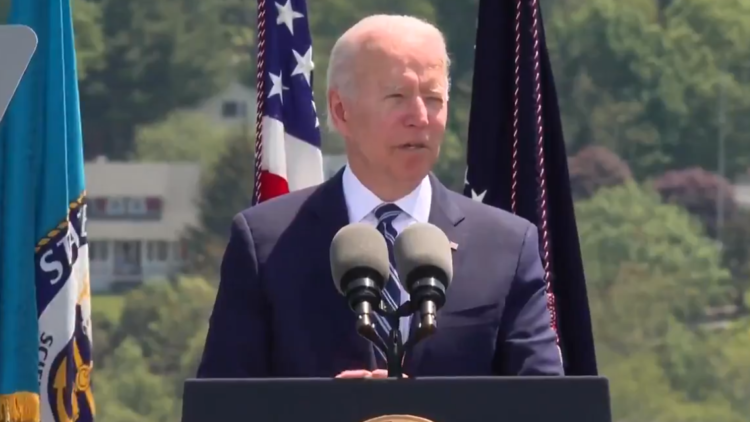 President Joe Biden chastised a class of U.S. Coast Guard graduates after he didn’t receive applause during his commencement speech.

“You’re a really dull class. I mean, come on, man. Is the sun getting to you? I would think that you would have an opportunity, that when I say that about the Navy, to clap,” Biden scolded the graduates.

Biden delivered a commencement speech to the U.S. Coast Guard Academy’s 140th commencement in New London, Connecticut. He mentioned the pride Coast Guard members should feel for being “the hard nucleus around the Navy formed in times of war.” Biden’s line fell flat, receiving crickets from the audience.

Reagan received a much more enthusiastic response when he said it.

Biden also quoted Communist Chinese Dictator Mao Zedong while praising the increased number of female graduates compared to years past. “There’s a saying we use in a different context, it’s a Chinese saying, it says, ‘Women hold up half the world.’ It’s an absolutely stupid position not to make sure they represent at least half of what we do,” Biden said.

At one point during the speech Biden seems to forget the name of a Coast Guard Lieutenant Commander.

Biden has made similar disparaging comments to military personnel who fail to clap for him during speeches. In 2016, Biden referred to a group of soldiers as “stupid bastards” after failing to clap for him.