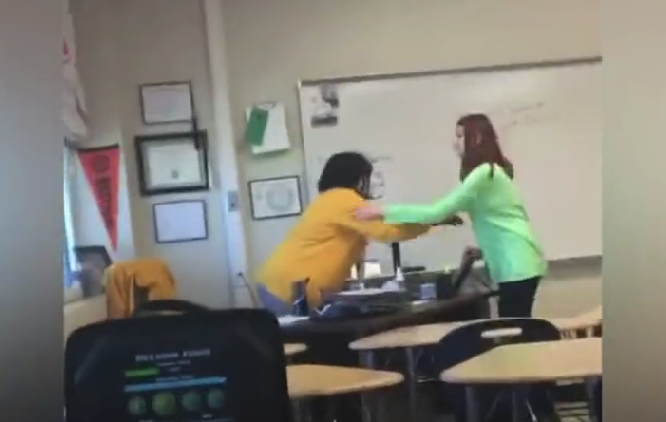 An autistic student faces suspension and possible criminal charges after assaulting a substitute teacher at a Castleberry ISD high school in Texas this week.

“You want to talk to her? ‘Cause she’s Black, and she’s [expletive] pissing me off right now,” the student is heard saying to her mother on the phone, referring to the teacher.

The teacher is a Black woman and the student is a white teenage girl.

The teen is seen marching up to the front of the classroom and attempting to push the hang-up button on the phone while the teacher is on a call. The teacher moves the student’s hand off the button and the girl responds by slapping the teacher’s arm.

“Deal with me!” the student shouts.

The teacher reacts calmly, walking over to the classroom door, presumably to call for security, although her words are not distinguishable on the video. While she is at the door, the student picks up the phone to call her mother.

“No, I’m calling my mama! You ain’t about to [expletive] me up, [expletive],” the student yells. There is a persistent and visible tremor in her left hand as she’s talking. The call ends with the student throwing the phone at the teacher and storming out of the classroom.

Evans wants people to know that there is more to this story than meets the eye. She says her daughter has multiple mental health issues and despite her advocacy on behalf of her daughter, the school has refused to recognize or provide what she considers to be appropriate accommodations for the 15-year-old, who is diagnosed with bipolar disorder, autism, and depression with anxious distress. Evans says more than ten different meetings with school administration has yielded nothing as far as getting her daughter moved to special education classes.

“I wish the school would label her correctly so that we didn’t have to go through this,” she said.

Evans also commended the teacher. “She is an amazing woman. She is calm, very collected, super sweet. I wanted to reach out to her, but didn’t know how. She, in my eyes, is definitely a saint and needs an award,” she said.

The district issued a statement on the incident via their Facebook page.

“Castleberry ISD is aware of, and greatly disturbed by, videos of an incident circulating social media in which a student becomes aggressive toward an African American teacher, including attacking the teacher physically and making racially charged comments and threats. We first want to commend the teacher for the calm demeanor and utter professionalism she demonstrated throughout the entirety of the incident, even when the situation turned violent and offensive. We support this teacher and her response in the strongest terms possible. Because criminal activity occurred, the District immediately turned this matter over to law enforcement,” it reads in part.

“After I saw that video, I was shaking with anger,” said Steve Poole, executive director of United Educators Association. UEA represents multiple teachers in the Castleberry ISD.

Castleberry police are leading the investigation, and the district is conducting an investigation as well. The student has been suspended for three days.