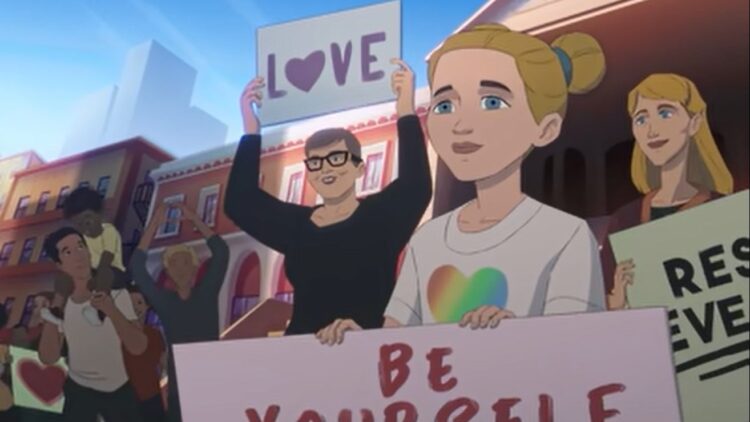 The U.S. Army released an advertisement featuring a girl who was raised by a lesbian couple and marched in pride parades.

The advertisement details the childhood of a girl named Emma as she grows up with two moms and boasts of “defending freedom from an early age” by taking part in pride parades. The two-minute video follows Emma through multiple years of her life. She watches her two mothers get married, joins a sorority at the University of California and eventually enlists in the U.S. Army.

“What had I really achieved on my own? One of my sorority sisters was studying abroad in Itlay. Another was climbing Mount Everest. I needed my own adventures, my own challenge. And After meeting with an Army recruiter, I found it. A way to prove my inner strength and maybe shatter some stereotypes along the way,” she says in the advertisement.

The Army advertisement comes as the Central Intelligence Agency released other woke-style ads in a series called “Humans of CIA,” which drew criticism from many on social media.

“Growing up gay in a small Southern town, I was lucky to have a wonderful and accepting family. I always struggled with the idea that I may not be able to discuss my personal life at work,” said a man in a CIA advertisement. He says he was surprised to see the CIA Director at the time, John Brennan wearing a rainbow lanyard while taking his oath.

Another advertisement released by the CIA shows a woman of color who describes herself as “A cisgender millennial who has been diagnosed with generalized anxiety disorder.” The woman also proclaims that she is “intersectional.”

Republican lawmakers mocked the advertisements on social media, some pointing out that America’s enemies were watching.

“If you’re a Chinese communist, or an Iranian Mullah, or Kim Jong Un … would this scare you?” Texas Senator Ted Cruz tweeted.

“The CIA needs to be focused on intelligence gathering and recruiting the best and brightest,” Tennesee Senator Marsha Blackburn said. “We can’t afford to risk our national security and waste resources to pander to the Left’s divisive rhetoric,” she added.