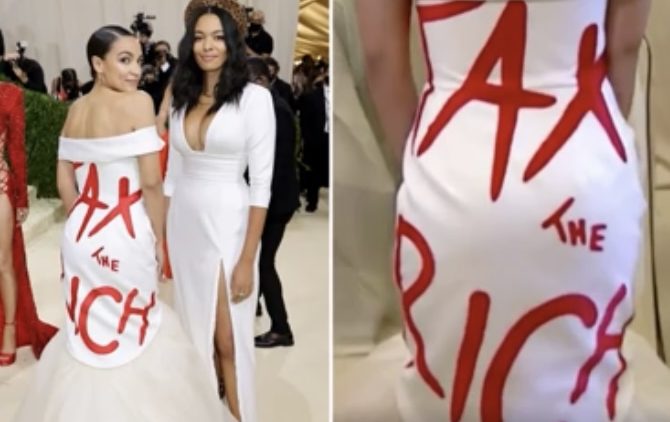 “We said, we can’t just play along, but we need to break the fourth wall and challenge some of the institutions, and while the Met is known for its spectacle, we should have a conversation about it,” AOC said.

Reactions to the dress were mixed, with some fangirling over AOC’s decision and others calling it a “stunt.”

“Each ticket to the event costs more than many families make in a year,” Tony Shaffer wrote on Twitter. “And taxation ONLY benefits politicians like @AOC that money goes to their green energy billionaire cronies & union bosses…the poor stay poor & she helps the rich get richer. She is pure ignorant evil…”

“WOW everyone jumping on @AOC for using a gala to spread ideas of tax equality. With a Tax the Rich dress. She is NOT a hypocrite! She is trying to help YOU,” a user wrote on Twitter.

“What’s wild is that I know AOC’s cultists paid attention to the fallout last year when BLM’s national chapter was exposed as a corporate woke-laundering operation, and criticized Tamika Mallory’s speech at the Grammys just like everyone else. Shoe feel [sic] tight on the other foot huh,” a user wrote on Twitter.

“AOC may have highlighted something really important for people,” Tim Pool wrote on Twitter. “Politicians may not get direct bribes but they get access to expensive elite spaces for marketing value and connections. I’d call it a bribe.”

A self-proclaimed Democratic Socialist and ‘Squad’ member, AOC has been one of the most vocal proponents of President Biden’s $3.5 trillion budget reconciliation package. The package aims to invest in climate change policy, universally reduce the price of childcare, and expand Medicare, among other things. The package also includes Majority Leader Chuck Schumer’s (D-NY) personal longtime goal to build a bridge from New York to Canada. Moderate Democrats like Sen. Joe Manchin (D-WV), however, have been holding up the package.

“Establishing an artificial $3.5 trillion spending number and then reverse-engineering the partisan social priorities that should be funded isn’t how you make good policy,” Manchin wrote in an op-ed.

“Undoubtedly, some will argue that bold social policy action must be taken now. While I share the belief that we should help those who need it the most, we must also be honest about the present economic reality.”