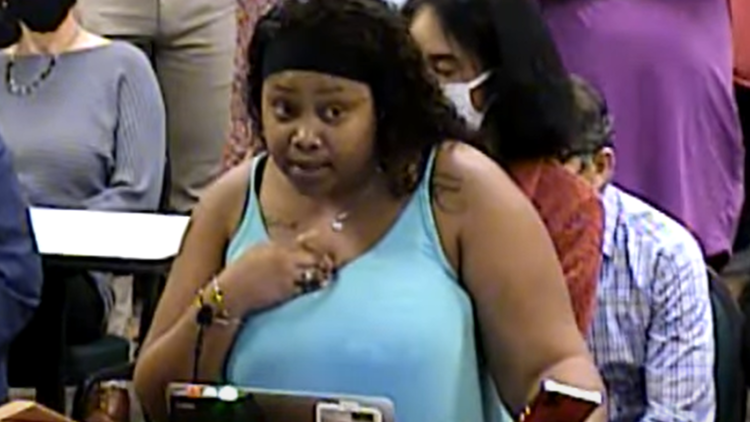 Parents of students at Inderkum High School in Sacramento, California, expressed their outrage over comments made by one of the school’s teachers claiming his goal was to turn students into communist “revolutionaries” at a recent school board meeting.

“I have 180 days to turn [students] into revolutionaries,” teacher Gabriel Gipe said to an interviewer working undercover with the transparency activist group Project Veritas. Gipe added that the way to turn otherwise apathetic students into revolutionaries was to “scare the f–k out of them.”

During the undercover interview, Gipe admits that he has an ANTIFA flag on his classroom wall and even forces students to take “quizzes” to see where they fall on the political landscape. Gipe said he takes pride in putting pictures of students’ faces on a giant political paradigm he has plastered on the wall and tracks their movement further and further to the left as time goes on.

Gipe also admitted to giving students extra credit if they showed up for left-wing protests or counter-protest at right-wing rallies. He says this motivates the students to get involved.

The communist teacher has a poster idolizing Chinese Communist Party leader Mao Zedong on his classroom wall. Mao’s “Great Leap Forward” resulted in the deaths of over 50 million Chinese people and created the largest famine in world history.

Parents upset about the teacher’s actions took to the microphone at the district’s Wednesday school board meeting.

“First of all, I would like to thank every parent that’s in here right now,” one angry mother named Cassie Ann started with her daughter standing behind her.

“The second thing is the reason why my daughter is standing behind me is because my job as her parent is to protect her from anybody that has ill will towards her. So being that this is her first year at this high school, that is world-renowned, and everybody knows about this school, it’s so perfect, and everybody does everything right. The first time my daughter tells me, and she goes against my wishes to come out of a classroom that’s disruptive to her wellbeing, I have an issue,” the mother continued.

“I am very articulate. My children are very well-read. They speak their opinion they make sure that they are clear in what they do and do not like and for the fact that my seventeen-year-old daughter had to come to me and say mom, ‘you don’t understand he’s.. let me explain..’ this means that in two weeks, in thirteen days, he[Gipe] was allowed to change my daughter’s mind about some fascist crap that yall have let in this school,” she went on.

“I’m tired. This is ridiculous. I’m from Texas. …This does not go on in Texas. They are two grades higher than California. So to think that my very sound-minded daughter would go against me and my wishes, and our values in our home, to be able to go and support this man, and he is putting her in harm’s way? What the hell are yall doing? I’m tired. How long does it have to go on before somebody says something? How long?… What are you gonna do? That’s the question? Get him[Gipe] out of here. We don’t f—ing care about this boy! He got to go!” she concluded as the parents in the room clapped and cheered.

Another mother spoke out against Gipe’s indoctrination of students and claimed that the school’s “culture of toxicity” has existed for years.

“Two years ago, my youngest child graduated from Inderkum High School. I can tell you that there is a culture of toxicity at this school, and we tried to address it during his attendance there,” the mother named Maria said.

“When he was a sophomore, his first year there, he took an English class. There was subtle indoctrination in the curriculum,” she continued. “It is not just in the government classes that this toxicity and poison is occurring. It is in English classes, it is in Art classes, we tried to address it through the proper chain of command. Only to be told that it would be taken of, and here I am tonight. He’s graduated!”

“I was born in Venezuela, and while I have been here in the United States for many years, my family, my father’s side is still there,” she added. “So what I hear is second and third-hand information. I do not want this place and this educational system to become Venezuela. And it is up to you. You have heard the people speak. You work for us. We expect you to do the jobs that you were elected to do.”

The Natomas Unified School District issued a statement on Wednesday, saying the teacher and his actions in the classroom will be investigated.

“Yesterday, a group released an undercover video that has been covered extensively,” the statement began.

“In this video, a teacher at Inderkum High School was recorded sharing his educational approach that is disturbing and undermines the public’s trust,” the statement continued. “The district is aware of the approach of the interview, and the editing used to create the video.  In following the principles of democracy, Natomas Unified staff is following due process, the law, and spent the past two days investigating the alleged teacher actions and his classroom environment.”

“As of today, this teacher was placed on paid leave because of his actions and choices in the classroom. Natomas Unified will be taking the legally required next steps to place the teacher on unpaid leave and fire the teacher,” it concludes.