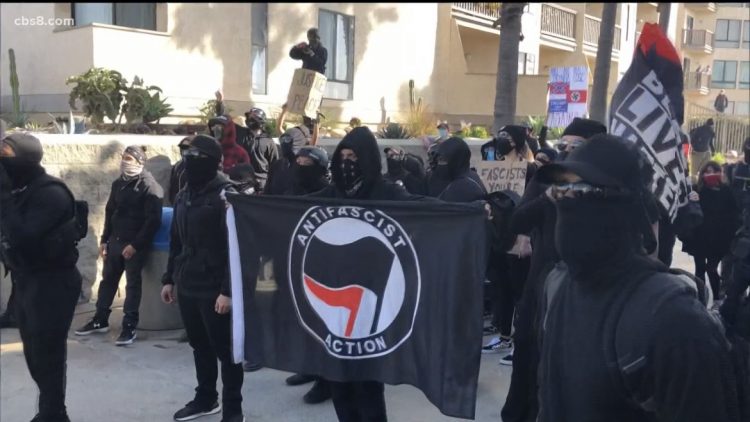 Prosecutors in San Diego charged at least 10 people who identified themselves as Anti-fascists with “violent criminal acts” after they allegedly tried to disrupt a pro-Trump rally earlier this year.

“Video evidence analysis shows that overwhelmingly the violence in this incident was perpetrated by the Antifa affiliates and was not a mutual fray with both sides crossing out of lawful First Amendment expression into riot and violence,” District Attorney Summer Stephan’s office said in a press release.

The defendants self-identified “with Anti-fascists or Antifa” and allegedly began their criminal conspiracy by “liking and sharing” a Jan. 2 social media post that called for a counterprotest against a Pacific Beach pro-Trump rally. On Monday afternoon, seven people arrested so far appeared in court for their arraignment. They all entered not guilty pleas and denied any and all allegations.

During one arraignment, the attorney for Luis Mora asked for his client to be released from custody on his own recognizance. Deputy District Attorney Will Hopkins swiftly rejected the request.

“Your Honor, in this case, we have Mr. Mora using bear mace on multiple individuals. We have Mr. Mora attempting to swing at a local photographer,” Hopkins said. Another defendant, Jonathan White, is allegedly shown in a video pepper-spraying a dog and its owners. White now faces charges of conspiracy, assault with a deadly weapon, use of tear gas not in self-defense, and animal cruelty.

Other defendants are accused of using pepper spray, small flag poles, sticks, and other items to attack the pro-Trump crowd. According to the criminal complaint, one group of the anti-fascists originated in San Diego, while another formed in Los Angeles. Those arraigned on Monday include White; Luis Francisco Mora, 30; Joseph Austin Gaskins, 21; Faraz Martin Talab, 27; Bryan Rivera, 21; Brian Lightfoot, 25; and Jesse Merel Cannon, 31. A $250,000 arrest warrant has been issued for Erich Louis Yach, 37.

This story will be updated as it evolves.