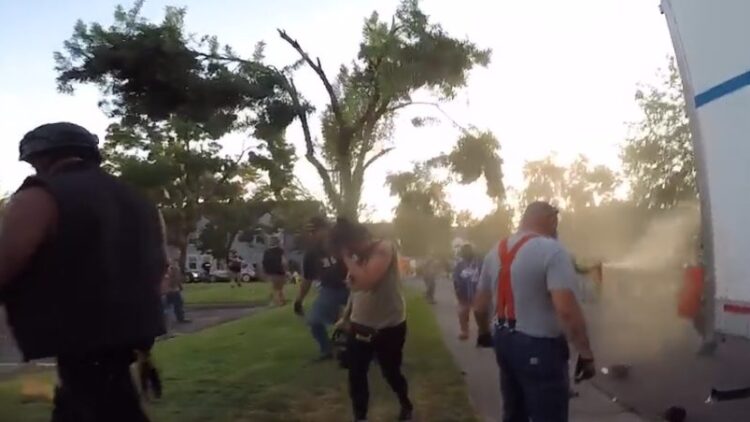 “Antifa showed up in Salem, Ore. to try & shut down a Christian protest event outside a Planned Parenthood on Tuesday evening. Antifa called on Twitter for comrades from around the state to come,” tweeted journalist Andy Ngo, along with a series of videos depicting the violence.

“A black man shouts, ‘Hey, we’re trying to have our service!’ Antifa confronted the Christians holding a worship/protest outside a Planned Parenthood in Salem, Ore. on Tuesday. A group of volunteer security had to form a wall to protect the Christians from antifa, who had weapons,” Ngo added.

“Salem, Ore.: #Antifa were held back from attacking the Christians at the Planned Parenthood protest on Tuesday evening by a group of volunteer security. At the end of the event, the antifa started pepper spraying first, leading to counter spraying & clashes,” Ngo tweeted.

“An antifa with a shield harasses an elderly man standing on the street at the Christian church event outside a Planned Parenthood in Salem, Ore. A volunteer security group was mobilized to protect the church after antifa turned their sights on Christians after the 2020 election,” Ngo tweeted.

“Worship in the face of the evil Antifa! Salem!” Tweeted Pastor Artur Pawlowski, one of the Christian protesters.

“Downtown Portland: Far-right extremists groups and anti-fascists battled on the streets off for over an hour. There were beatings, mace, and improvised firework explosives. No police response,” Sergio Olmos tweeted, along with video of the violence.