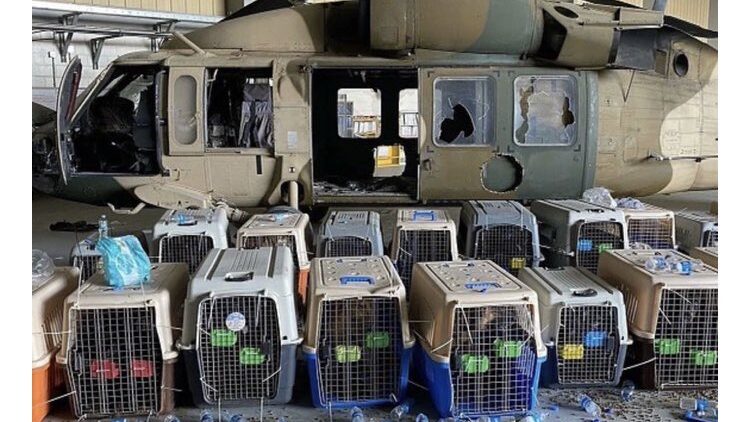 An animal rights group denounced the Biden administration on Monday for allegedly leaving behind working dogs in Afghanistan after the withdrawal of U.S. troops.

“The American government is pulling out of #Kabul and leaving behind brave U.S. military contract working dogs to be tortured and killed at the hand of our enemies,” American Human wrote in a tweet. “We stand ready to bring them home!”

American Humane’s CEO also released a statement on their website.

“I am devastated by reports that the American government is pulling out of Kabul…these brave dogs do the same dangerous, lifesaving work as our military working dogs and deserved a far better fate than the one to which they have been condemned,” Robin Ganzert, President and CEO of American Humane, wrote in a statement.

“This senseless fate is made all the more tragic, as American Humane stands ready to not only help transport these contract K-9 soldiers to U.S. soil but also to provide for their lifetime medical care,” Ganzert continued. “It sickens us to sit idly by and watch these brave dogs who valiantly served our country be put to death or worse.”

“We call on Congress to take action to classify contract working dogs on the same level as military working dogs. Failure to do anything less is a failure of humanity and a condemnation of us all,” Ganzert concluded.

Reactions online have been highly critical of the Biden administration.

“What kind of person would abandon military service dogs in a war zone? Joe Biden,” Congressman Mike Loychick (R-OH) wrote in a tweet.

“[Jake Sullivan] and [Anthony Blinken] should be fired for many reasons…they should also be known for abandoning service dogs locked in crates,” Ric Grenell wrote in a tweet.

“These are service members Biden left behind. Dogs are considered unclean in Islam. What do you think will happen to them?” Harmeet Dhillon said in a tweet.

“We left behind service dogs in Afghanistan at the Kabul Airport. I’m visibly angry about this,” JD Sharp wrote in a tweet.

“This is my dog. She never left my side when I went through Stage 3 chemo treatment 6 times. Joe Biden’s White House is filled with heartless people for leaving service dogs behind,” Ric Grennell wrote in a second tweet.

President Biden’s staff has not responded to the Independent Chronicle’s request for comment.