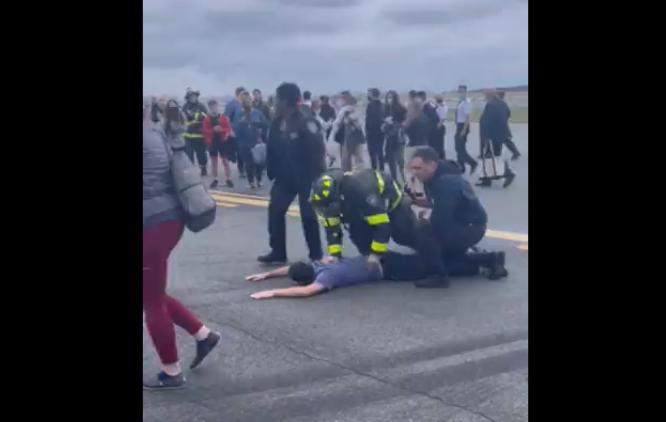 A plane made an emergency landing on Saturday after a passenger thought a man sitting nearby had a bomb, but was in fact adjusting the settings on his vintage camera.

A woman on board the same flight as the photographer reported “erratic” behavior as she observed a man sitting near her family scrolling through images of old cameras, which she mistook from a distance as him looking up information and photos on bomb making.

When the photographer brought out his own vintage camera and began to make adjustments to the settings, the woman convinced herself that he was preparing the timer on a detonator.

The woman alerted airline staff, and the plane made an emergency landing at New York City‘s LaGuardia Airport. The plane was evacuated far away from the airport buildings and all 78 passengers were quickly escorted off the aircraft using the inflatable slides.

“Once we came to an exact stop, we just hear over the intercom, ‘Evacuate, evacuate! Get out, get out!’ and I had not seen anything going on so I had assumed it was like a fire or a mechanical issue, so we just panicked, looked for the slide, and slid down,” said Laura Bergdoll, another passenger on the flight.

Photos and video surfaced of the photographer lying face down on the tarmac while security officials confiscated and searched his luggage. Federal agents and port authority officials detained the man for several hours before it was officially declared that the man was not a threat.

“The JTTF [Joint Terrorism Task Force], the FBI and the Port Authority Police Department determined that there was no criminality on the part of the passenger and he was released,” said Tom Topousis, Port Authority spokesperson.

“If somebody felt um I guess that scared, especially flying into New York, I can understand why they took the precautions they did,” Bergdoll said, adding that she was glad that the person was not charged.