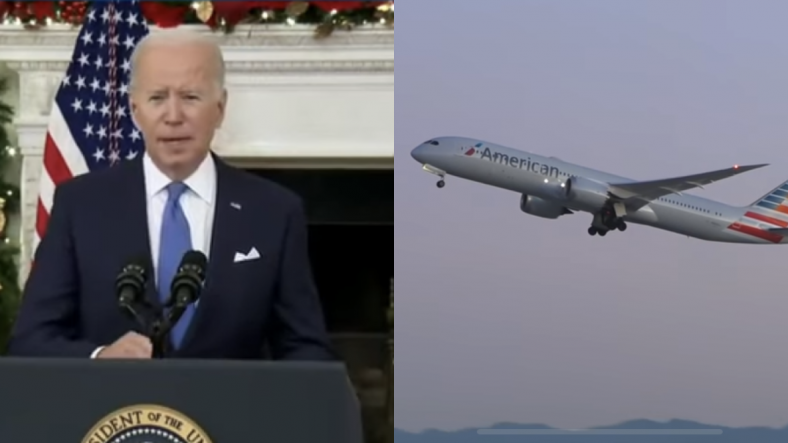 An American Airlines pilot is now under investigation after a “Karen” passenger reported him to airline authorities for displaying a “Let’s go Brandon” badge on his luggage.

“’Hey @AmericanAir – Y’all cool with your pilots displaying this kind of cowardly rhetoric on their crew luggage when they’re in uniform, about to board a plane? We are not the only passengers who noticed and were disgusted,” passenger Dana Morrison – dubbed the “Karen” of the flight – tweeted at American Airlines.

RELATED: Elderly Jewish couple sue after being kicked off plane for refusing to place religious shawl on the floor

The airline tweeted back, saying, “Thank you for bringing this to our attention and we want to get this to the right team. Please DM any additional details.”

“We hold our team members to the highest standards and expectations,” the airline said.

“We take this very seriously and we have sent this over to crew leadership. They will handle this internally after review. We assure you appropriate internal review will occur,” they continued.

The airline has very specific policies when it comes to badges that can be worn by its pilots, and of the approved pins, pilots are allowed to wear only three at a time.

RELATED: Airline passenger tackled by security after someone mistook his vintage camera for a bomb

American Airlines has a policy of not supporting political organizations but critics were outraged in 2020 when it endorsed a Black Lives Matter pin for its employees. Reportedly, the BLM badge was released after a group of employee activists lobbied for it amid widespread use of non-approved pins, badges, and expressions of support for the political movement.

“American Airlines believes in equity and inclusion for all,” read a statement released by the airline at the time. “In light of the appropriate attention to lives of Black Americans, we will allow team members who wish to wear a Black Lives Matter pin to do so if they choose.”

“We Believe Black Lives Matter,” the statement continued. “While American isn’t expressing support for specific organizations, we stand in solidarity with the movement for equality and justice for Black Americans who continue to experience racism and discrimination.”

“The World is watching, If crew can openly wear BLM merch, hard to justify censoring this,” one person tweeted.

“This pilot deserves a raise for dealing with entitled Karens while doing his job,” tweeted Christina Pushaw.

“I’m an Executive Platinum, have been for nearly 7 years, flying nearly 150k miles a year pre-covid. You will lose a loyal customer if you punish this pilot for exercising his 1st amendment,” another person tweeted with a screenshot of his Executive Platinum status.

“He’s exercising is first amendment right. Without any violence,” someone else observed.