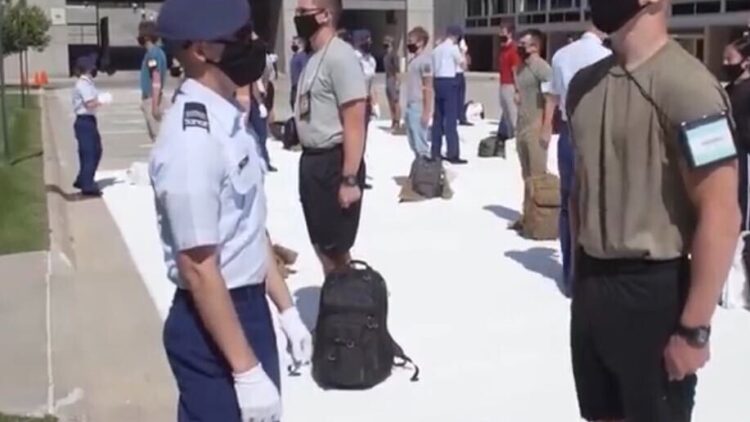 “We are pleased to offer this introductory D&I course as part of our commitment to working with cadets and cadet candidates in fostering a safe community built on mutual respect, teamwork, and personal dignity,” writes Yvonne L. Roland, director of Culture, Climate, and Diversity at the Academy.

The video is a make-believe scenario where two white friends try to persuade their multi-racial friend Jose to attend a Black Lives Matter meeting with them.

A fourth (white) friend comments how he doesn’t understand BLM. “No offense, but it seems like all lives matter would be a better way to bring people together,” the friend says.

At this point in the training, the student is given the option of three different ways to ‘respond’ to the fourth friend in the scenario, and all of them are supportive of the Black Lives Matter organization.

The fourth friend’s comments are deemed “problematic” by the others. They decide that the appropriate way to deal with him is to explain BLM ideology and provide analogies to educate him. The video ends with the fourth friend coming around to their point of view on how logical BLM is and committing to investing more time in learning about BLM.

The issue of teaching material that promotes and supports CRT and BLM has come into the spotlight increasingly frequently in recent months.

Retired Lt. Gen. Rod Bishop and Dr. Ron Scott, a retired USAF Col., are leaders fighting to stop CRT from being included in the curriculum. They maintain that CRT is “simply Marxism repackaged in new terms.” They founded an organization, Stand Together Against Racism and Radicalism in the Services, Incorporated, specifically to fight the implementation of CRT.

However, Lynne Chandler Garcia, associate professor of political science at the Air Force Academy, thinks critical race theory is “vital.” She came under fire after admitting that she teaches CRT as part of her curriculum, maintaining that the United States has a history of racism that “shaped both foreign and domestic policy.”

Col. Mark Anarumo argues against teaching CRT. “It’s what to think versus how to think,” he said, pointing out that the “problem with that is there is a natural power dynamic in higher education, or really in any education, where if the professors are steering you towards a certain way to think, and you buck that, your grade suffers.”

The Academy’s Chief of Media Relations Dean J. Miller defended the video training, saying it is “used at universities and colleges across the country.”