Afghan translator who saved Biden in 2008 left behind after U.S. withdrawal, hiding from Taliban: report 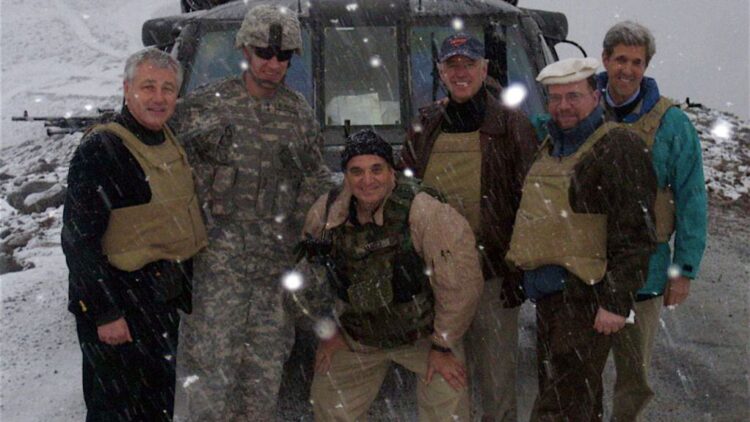 An Afghan interpreter who helped rescue then-Senator Joe Biden when he was stranded in a remote Afghanistan valley after his helicopter was forced to make an impromptu landing during a snowstorm, is pleading for the President to help him and his family stranded in the now Taliban-controlled country.

“Hello Mr. President: Save me and my family,” the interpreter who goes by Mohammed told The Wall Street Journal on Monday. “Don’t forget me here,” he added.

Mohammed was 36-years-old and working as an interpreter for the U.S. Army in February of 2008 when two U.S. Army Black Hawk helicopters carrying then-Senator Joe Biden, former Senator John Kerry (D), and former Senator Chuck Hagel (R) were forced to make emergency landings during a snowstorm in a remote Afghan valley.

Mohammed was stationed at Bagram Air Field and received the crew’s call for help. He jumped in a Humvee with a Quick Reaction Force from the 82nd Airborne Division and drove hours into the mountains to rescue them, according to the report.

Mohammed says he and his four children are now forced to hide out from the Taliban after attempting for over a year to flee Afghanistan. He says they are among countless Afghan allies who are now left behind after the U.S. removed its forces from the country and brought an end to the war spanning over two decades.

RELATED: Biden says he isn’t ‘supposed to take any questions,’ turns back when asked about Afghanistan

Mohammed was reported to be involved in over 100 firefights, fighting alongside American forces during his time of service.

“His selfless service to our military men and women is just the kind of service I wish more Americans displayed,” Lt. Col. Andrew R. Till wrote in support of Mohammed, according to the Wall Street Journal. Unfortunately, Mohammed’s request for a Special Immigrant Visa was wrapped up in bureaucracy after the defense contractor he worked for lost the records he needed for his application.

“If you can only help one Afghan, choose [Mohammed],” wrote Shawn O’Brien, an Army combat veteran who worked with him in Afghanistan in 2008. “He earned it.”

Biden used the helicopter incident as a talking point during the 2008 presidential campaign to boast of his foreign policy experience.

“We were going to send Biden out to fight the Taliban with snowballs, but we didn’t have to do it,” John Kerry reportedly joked after they were rescued.

The White House has yet to comment on the report.