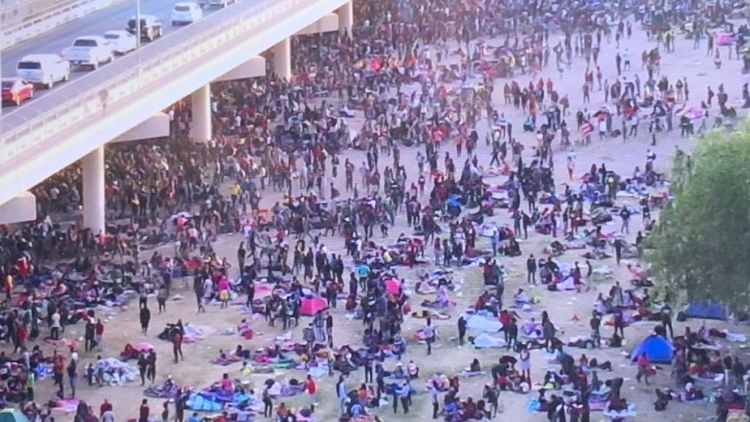 Texas Governor Greg Abbott said Thursday that he instructed the closure of 6 points of entry along the border in response to the Biden administration’s failure to deal with the border crisis.

The number of migrants at the Del Rio entry point doubled from 4,000 to approximately 8,200, according to Fox News National Correspondent Bill Melugin.

“BREAKING: Our drone is back over the international bridge in Del Rio, TX. Per source, the number of migrants waiting to be processed has now swelled to approx 8,200. It was 4,000 yesterday AM. Doubled in one day. BP overwhelmed, & I’m told situation is ‘out of control,'” Melugin tweeted Thursday.

“The sheer negligence of the Biden Administration to do their job and secure the border is appalling. I have directed the Department of Public Safety and the Texas National Guard to surge personnel and vehicles to shut down six points of entry along the southern border to stop these caravans from overrunning our state.” Abbott said in a statement.

“The border crisis is so dire that the U.S. Customs and Border Protection is requesting our help as their agents are overwhelmed by the chaos. Unlike President Biden, the state of Texas remains committed to securing our border and protecting Americans,” he added.

Melugin said most of the migrants arriving at the Del Rio entry point were Haitians and were arriving “by the minute.”

“Law enforcement source on the ground at the bridge this morning just sent me this video showing the situation there. I’m told a large majority of the migrants are Haitians and more are crossing into the US and arriving at the bridge by the minute. BP w/ limited manpower,” Melugin tweeted.

The mass migration of Haitians to the U.S is partly caused by recent chaos in the country caused by the assassination of their president, Jovenel Moïse on July 7, which rocked the country.

The “highly coordinated attack by a highly trained and heavily armed group” occurred sometime after midnight while President Jovenel Moïse and First Lady Martine Moise were sleeping in their private Port-au-Prince residence.

The president was killed while the first lady survived the attack, suffering multiple gunshot wounds. She was sent to receive medical care in Florida and has since returned home to Haiti.

On top of the recent assassination of their president, Haitians have been recovering from a 7.2 magnitude earthquake that struck the country in August. The quake left an estimated 650,000 people in need of aid and destroyed more than 120,000 structures across the country.